The TerrainTiler class library is now progressing very well. Not loading actual tiles yet just random color HillHeightMaps but it’s working and quite flexible: so far I’ve tested a 3×3 grid and a 5×5 grid (shown below)  code also allows 7×7 and 9×9, i’ll test these later, getting late here.

Code is up on GoogleCode so others can look at or test it, currently it’s a project for jMonkeyEngine SDK so you can load the whole project into the SDK and just run it. 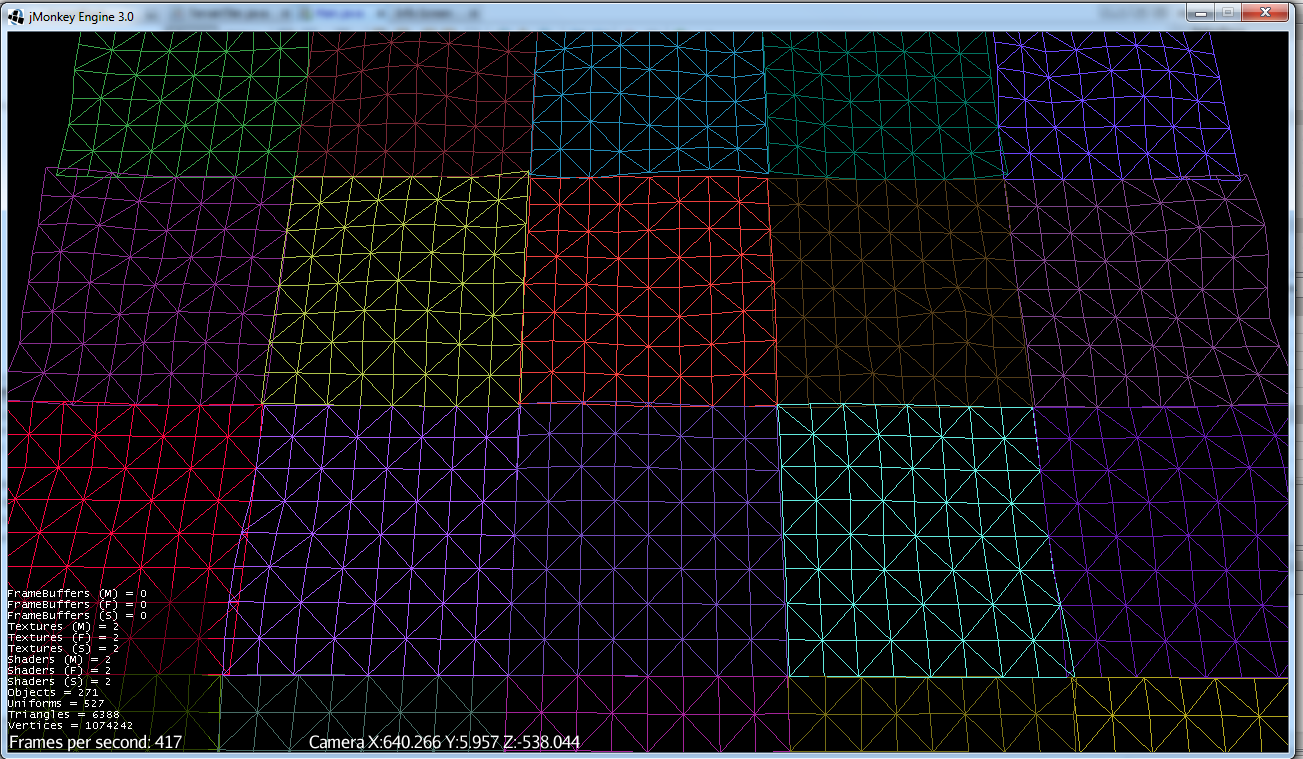 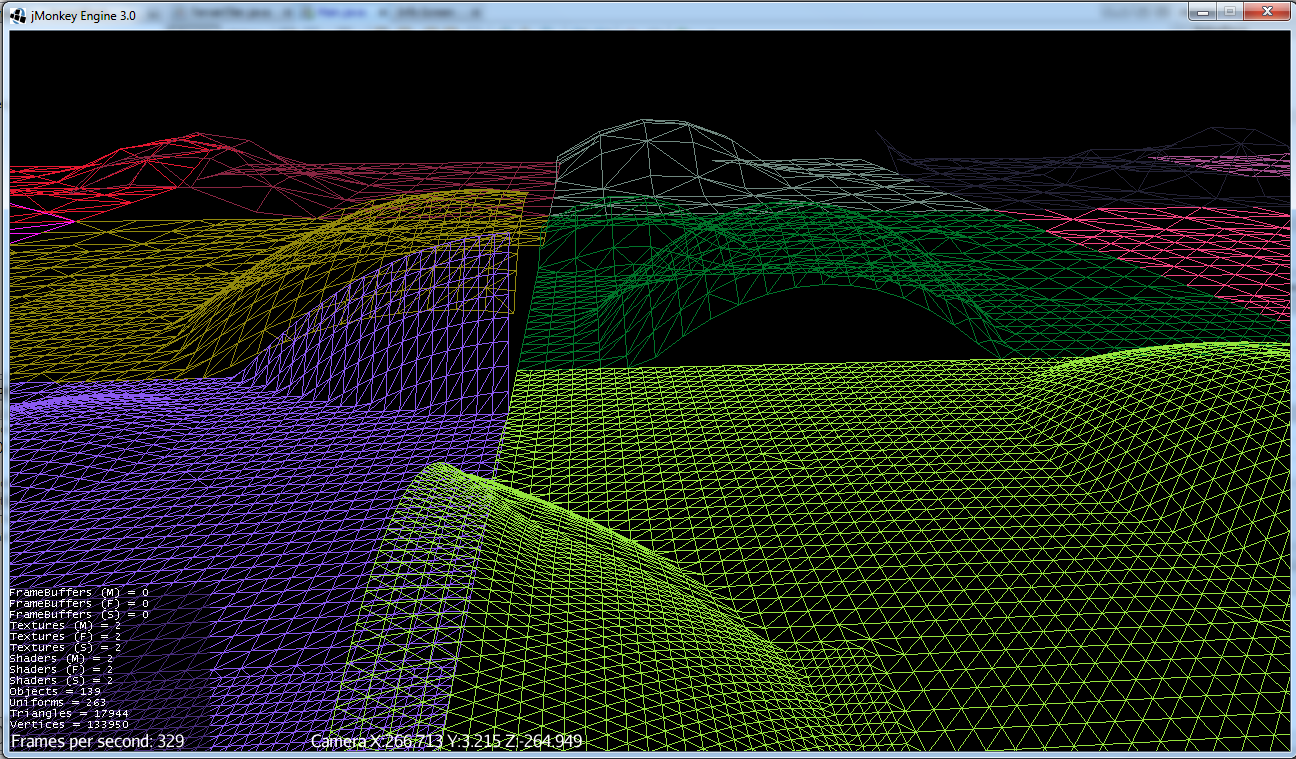 I haven’t forgotten this project, never will. Unfortunately other issues and jobs in my life have caused delays.

Still working on breaking TerrainTiler out into its own class, being an old-school structured programmer for so long its taking me a lot of effort to unlearn old styles and learn the newer OOP stuff. I think I have the concept of classes and objects coming together in my head but making a new class of this scale is proving a challenge. Especially with all the other distractions in my world.

One thing I have been active with is idea and concepts on many aspects of the game itself, the world, the characters and the game play. All just ideas and subject to changes so for now they stay in my head but they will come out here eventually and I get more confident on them.

Currently thinking of going full first person gameplay, I know this is not the normal for an MMORPG but maybe I have a few ideas to make it work and be different from the many other games out there. Maybe, time will tell.

Stay tuned, I am on holidays for a bit as of today and this project will be getting some love.

Getting progress on the TerrainTiler routine, still need to break it out into its own class and give it threading but it is working and frame rates are still good.

Terraforming tools are also coming together nicely, currently I can smooth the whole visible terrain, paint it with different textures, scale the textures and swap them out for others.

My planning is to have 4 textures per tile but each tile can have 4 of however many textures I decide to have available, this way each tile stays simple but I can have a vast array of different textures to suit the varying type of areas across the map. Also this allows me to put a lot of detail in such as normals/glow/specular maps as I need without breaking the limits of the older graphics cards.

(The small oval is my “Player” (no pretty models yet, mechanics first). I use the player to test the physics of the terrain for issues as I go. The dome is the tool, adjustable in size.) 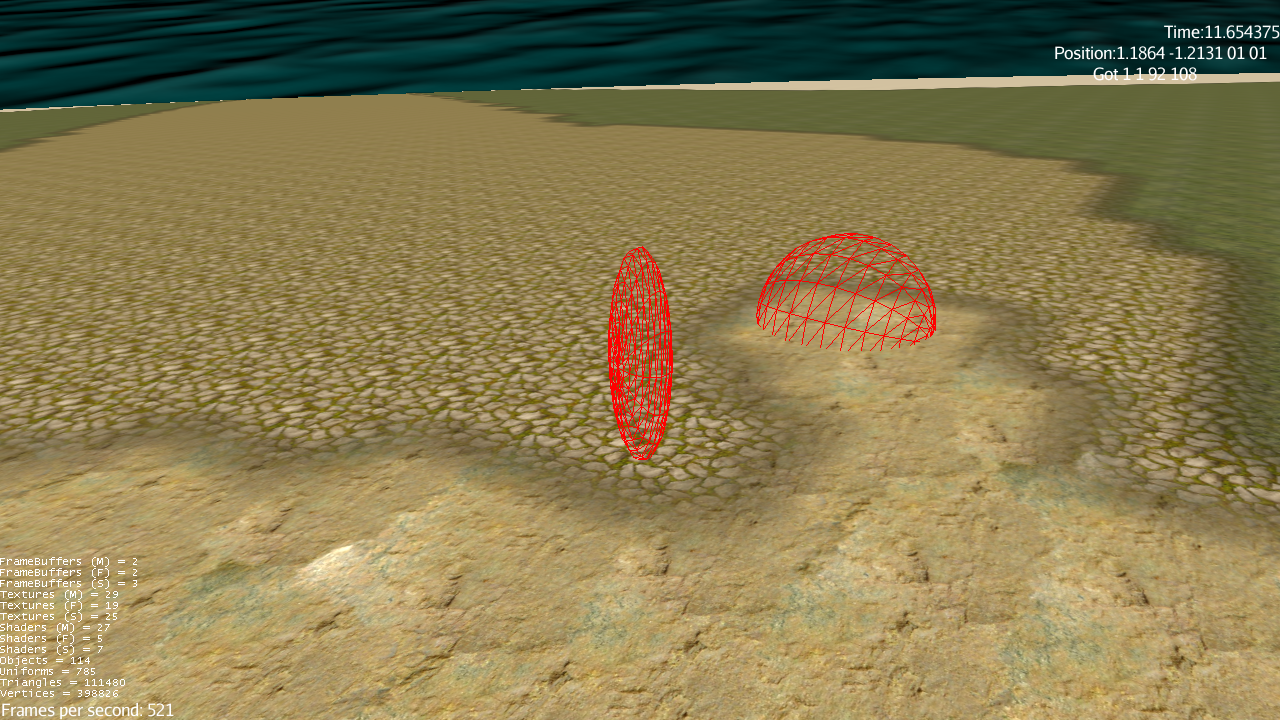 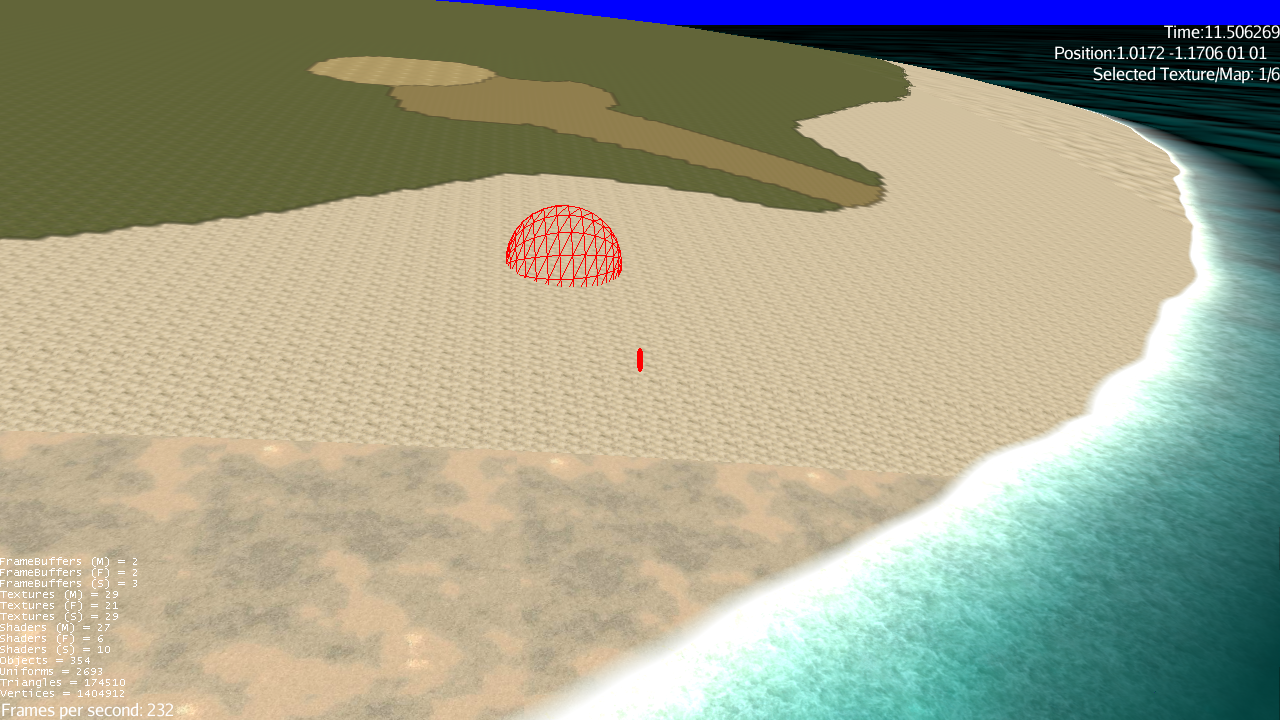 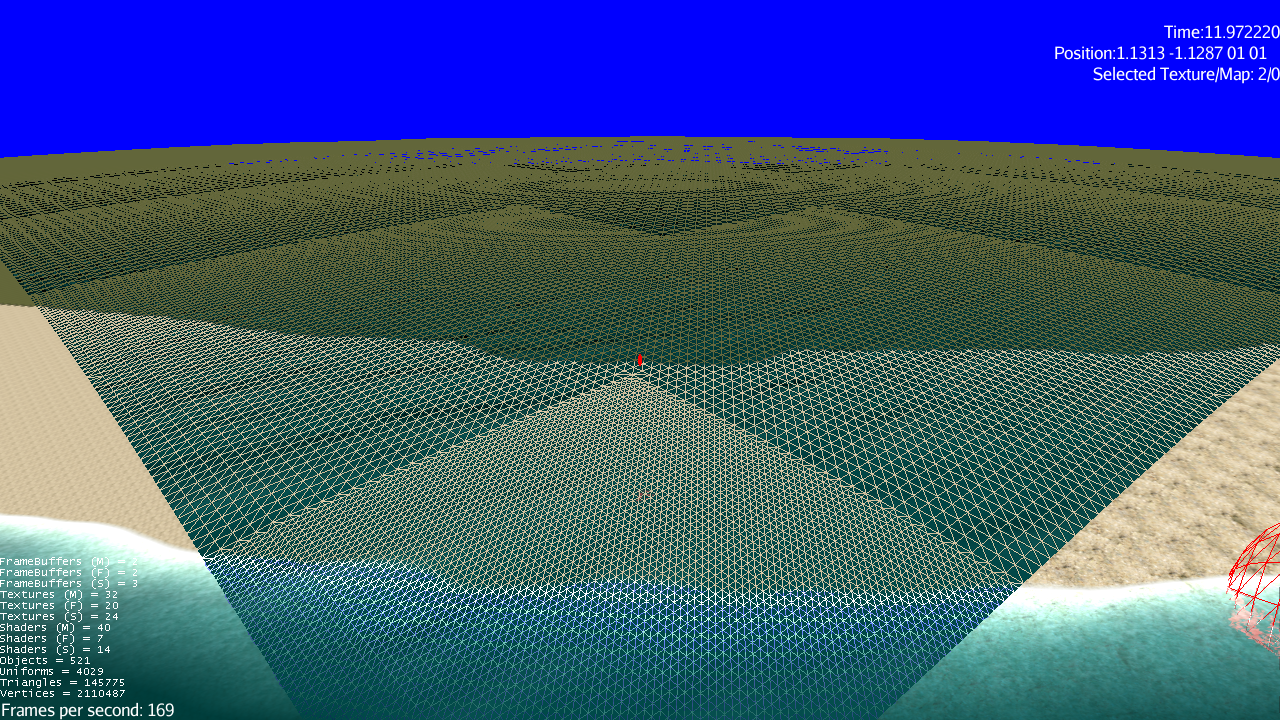 Quick update, not much has changed visually but I’ve had to rework the terrain code, well I’ve gone back to an older version I was working on and fixed it. Why? because the terraingrid function of jMonkeyEngine wasn’t working out, sure it was fast and easy but it was also very memory hungry, like I managed to clock up over 7GB of memory just wandering around the terrain. Sorry, no, not going to work.

So back on to my own TerrainTiler code, I’ve managed to bring its speed back up to at least equal to that of terraingrid. Which is impressive as terraingrid was only 2×2 visible tiles active (and 12+ cached <= the memory issue) where as my tiler routine is a 3×3 patch of visible tiles (no cache, new tiles saved to disk for later re-use). So my code gives me more visible ground and distance so less chance of a player seeing the landscape “popping” into existence as they wander around but still allows for a very large terrain.

edit: My routine is still using the jMonkeyengine TerrainQuads for each tile but they are treated individually and loaded in and out as the player moves, where as the built in TerrainGrid is 4 quads loaded as one and swapped in/out as the camera moves.

I’m very happy I managed to get that code working, now just trying to fix the terra-forming code to suit the new routine. Being a pita but I’ll work it out. Once I get those sorted and can tidy up and modify my terrain I’ll be able to post some more pics.

Until next time! Thanks for reading! 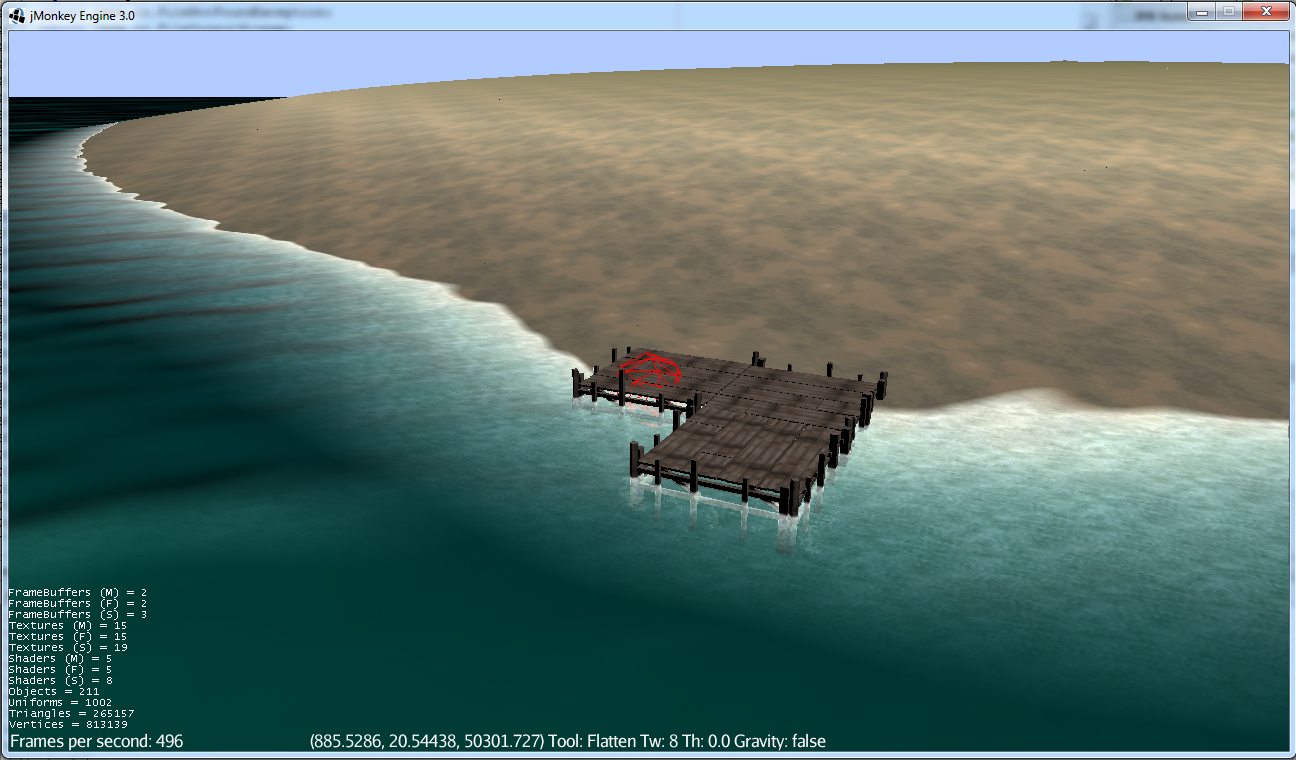 Object is from the free community asset pack with the 3D engine. I’ll make my own objects when I’ve got the base code filled.

FYI the engine I’m using is the jMonkeyEngine.

Here’s the base heightmap I’ll be starting with, still waiting on GIMP to release 16-bit grayscale function to do it right, unless I compile it myself… nah…

The resulting tiles will be a little flat and noisy from the upscaling but that will sort out as I optimise and terraform the land.

Writing my own landscaping tool for this, gives me what I need and help me to learn the code side of the 3D engine I’m using. 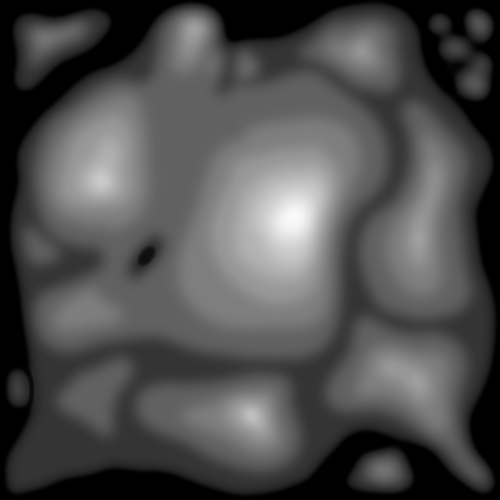 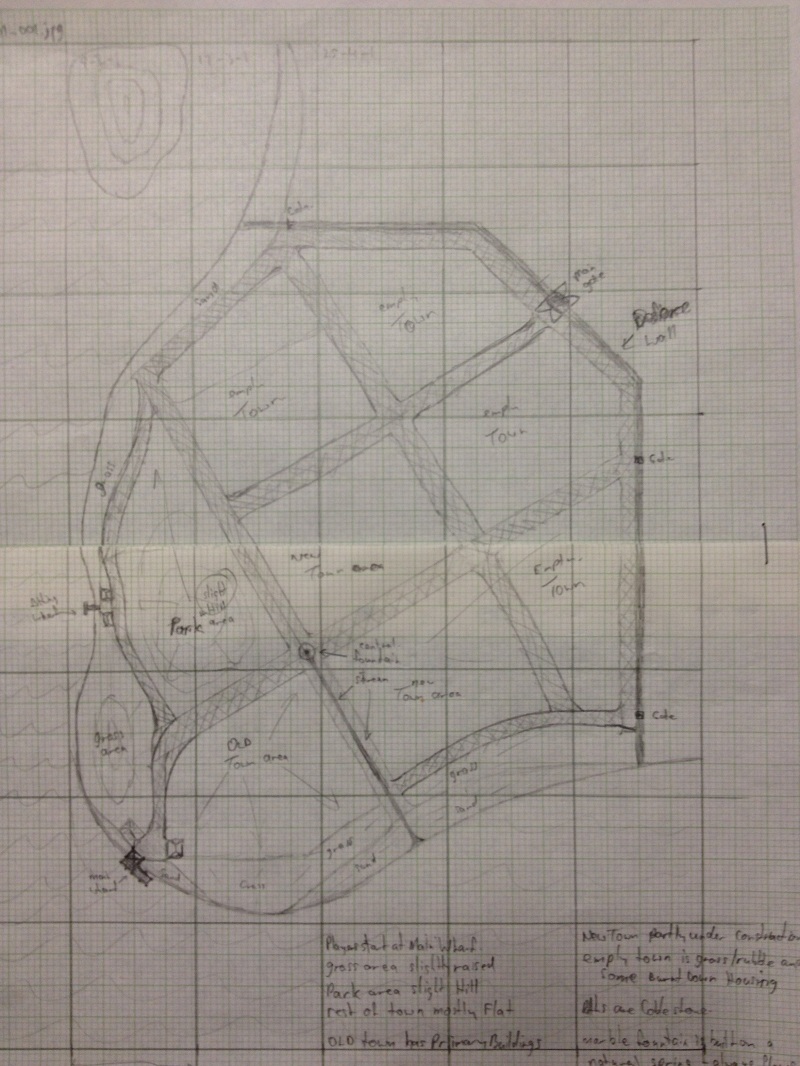